Schedule Your Ear Piercings at FRDA!

Ear piercing is a historical, multi-cultural body modification that has played a role in a variety of religious and social constructs. 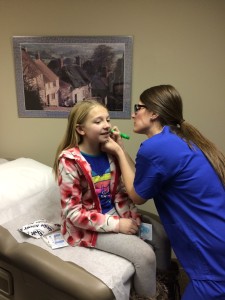 Evidence of ear piercing dates back to the Copper Age after which an Iceman who died in the Alps during this period was found in mummified status with signs of ear piercing. Persians pierced the ears of soldiers, Roman women often pierced their ears to separate themselves from the working men, and 16th-century European males pierced one ear to show virility. Ear piercings have been around for a while!

Whether it be the popular ear clips of the Roaring 20’s or the heavy hanging hoops of the 70’s and 80’s, ear piercing has played its part in American history, too, and now you can join the party and get your ears professionally pierced at Front Range Dermatology! Our certified Medical Assistants or Physician Assistant can pierce your ears at an FRDA clinic, and you can rest assured that your ears will be safely pierced. We see people of all ages. Call 970-673-11550 to schedule an appointment and let the receptionist know you want to get an ear piercing appointment.