When To Worry About a Mole (And See a Dermatologist) 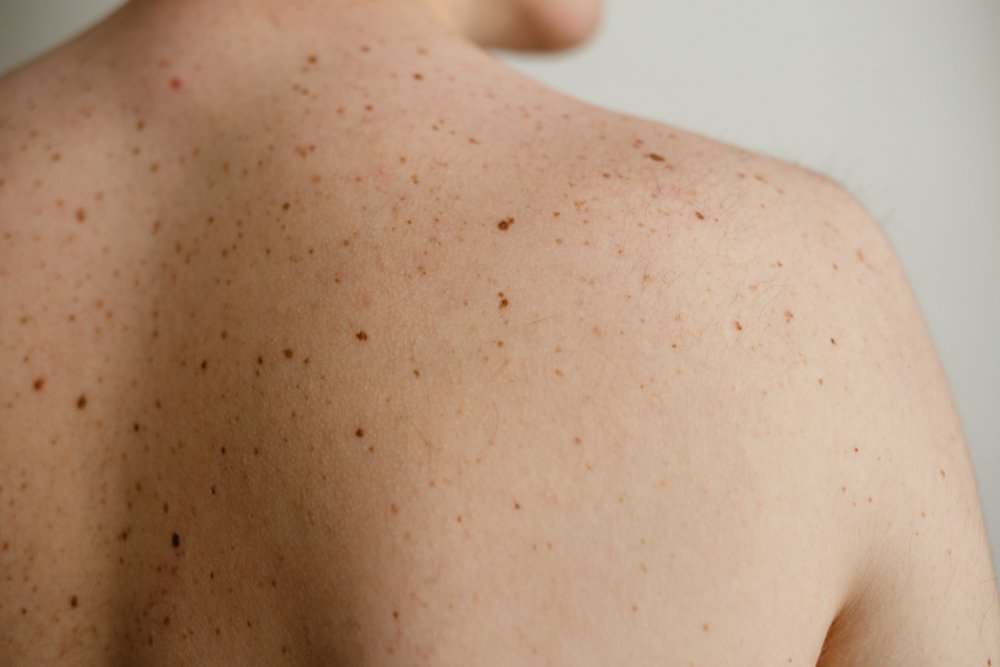 Each person’s skin is as unique as they are. And although nearly everyone has moles on their skin, each person’s moles are different. Most moles are harmless and are simply part of a person’s body. But in some cases, moles can be cancerous and even deadly.

You should take moles seriously, but you don’t need to rush to the dermatologist just because you have a mole. Here is everything you need to know about moles and skin cancer and when you should contact your dermatologist.

What Is A Mole?

A mole is a growth on the skin that appears either brown or black in its most basic form. Moles occur when the skin cells grow in a cluster instead of being spread throughout the skin. Groups of skin cells that cause moles are related to genetics or being out in the sun.

Moles can occur anywhere on the body, either individually or as part of a group. Some moles are easy to spot, such as moles on the face or back, while others are in more hidden locations, including the scalp or behind the ears. Most moles appear during childhood, and it is common to have 10-40 moles by adulthood.

Moles can naturally change as you age. Some people may experience moles that darken after being in the sun or during pregnancy. Most moles are harmless lumps of skin cells, but others can be cancerous and potentially deadly. 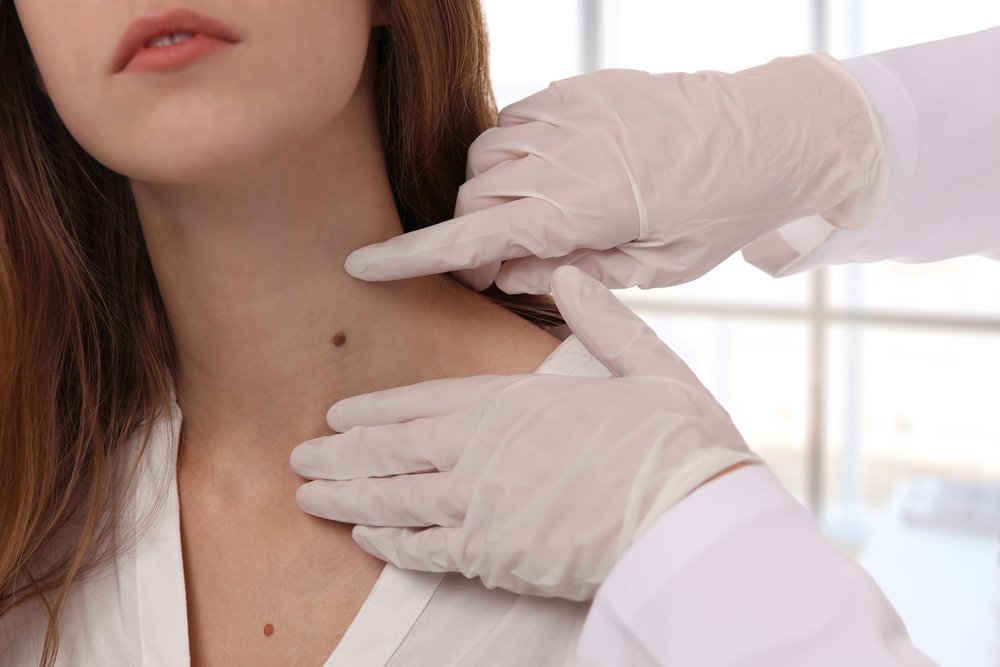 Moles come in all shapes and sizes and can be anywhere on the body. Because there is such a variety of moles, it is often difficult for people to know if their mole is normal or not.

Normal moles can appear all over your body, anywhere from your scalp down to your toenails. A normal mole can be flat to the skin or raised and either brown or skin-colored. Normal moles are the size of a pencil eraser or smaller, and some can be as small as a pinhead.

Normal moles are round and have a defined outline and even shape and coloring. Although they may get slightly darker with age, normal moles don’t change size or become uneven in their shape or color.

The majority of moles are non-cancerous. However, that doesn’t mean that all non-cancerous moles look the same. There are different types of moles, and some carry a higher risk of containing cancerous skin cells. 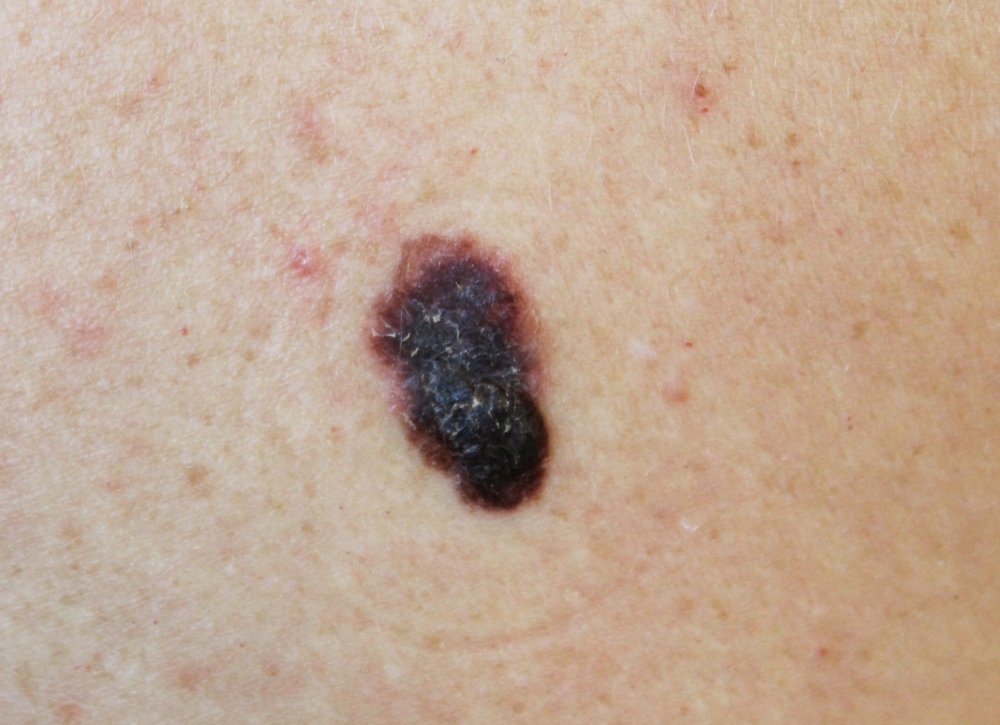 Skin cancer can come from a variety of sources and symptoms, including moles. There are many types of skin cancer, but the deadliest form of skin cancer is melanoma, and cases are on the rise. Melanoma is most often found in moles. And because nearly every person has multiple moles, every person is at risk for melanoma.

The good news is that melanoma and other skin cancers are easily treatable if they are detected early. This is why it is crucial to pay attention to your skin and contact your dermatologist if you notice anything changing or out of the ordinary. Regular skin exams and visits to the dermatologist could end up potentially saving your life.

BCCs and SCCs may often look like moles and can get confused for normal or atypical moles. These aren’t actually moles but are groups of cancerous skin cells changing in appearance. BCCs and SCCs can grow and change quickly, which is why it is essential to pay close attention to the skin all over your body.

Basal cell carcinoma, or BCC, is the most common type of skin cancer. Basal cell carcinomas frequently develop in people with fair skin. A BCC can look like a skin-colored round growth or pink patch of skin and usually develops after years of repeated indoor tanning or sun exposure.

A BCC may often look like a scar or an area of skin that is flat, firm, and pale. A basal cell carcinoma can also have itchy, raised red patches. Some BCCs are fairly easy to detect because they stand out from the skin tone, but most are subtle and light-colored.

Basal cell carcinomas can grow deep into the skin tissue very quickly, so early diagnosis is essential. If the BCC is left to grow without treatment, it can grow into the nerves and bones and lead to severe and life-threatening issues.

Squamous cell carcinoma is more common in people with fair skin and tends to form from frequent sun exposure. Like basal cell carcinoma, SCC can grow deep into the skin tissue and cause disfigurement and damage if not diagnosed and treated early.

Basal cell carcinoma and squamous cell carcinoma are both serious but come with a relatively high recovery rate. Although these types of cancer don’t often appear in moles, you can also check for these changes to your skin when you check for moles. If you notice anything that looks like a BCC or SCC, contact your dermatologist.

When To See A Doctor About Your Mole

Nearly everyone in the world has moles, but it can be difficult to know when you should be worried. It can be nothing, or it could be cancerous. The best way to keep track of your mole is to watch it and pay attention to how and if it changes.

A mole can turn into skin cancer if it starts to change over time or becomes uncomfortable. To know when you should be worried about a mole and see a dermatologist, follow the ABCDE rule. Dermatologists look for these five factors when examining a mole for melanoma skin cancer. Just because you’ve noticed one of these doesn’t automatically mean you have a cancerous mole.

The ABCDEs are considered in whole, meaning that it often takes multiple factors and symptoms for a mole to be cancerous. However, you should still contact a doctor if you notice any of these things:

Aside from the ABCDE rule, there are a few other signs it’s time to see your dermatologist about a mole. If a new mole develops when you are in your 30s or later, it could cause concern. Almost all moles develop in childhood, so a mole that appears later is unusual.

If you have a mole that is painful, itchy, or tender to the touch, contact your dermatologist. On their own, moles are simply clumps of skin cells and shouldn’t be uncomfortable or painful. Some moles may start to bleed, ooze, which could also potentially be a sign of cancer.

Some people are more at risk for melanoma and other forms of skin cancer based on other factors than just their moles. Your doctor will likely ask you about these risk factors.

If you are at a higher risk for skin cancer, you should pay more attention to your skin and look for changes to your moles. What may appear to be a smaller change on someone else’s mole could be more significant if you have other risk factors.

People who have fair skin that easily burns or freckles are at a higher risk for skin cancer, and people with blonde or red hair and blue or green eyes. If you have spent a lot of time in tanning beds or exposed to the sun, or have a history of severe sunburns, you are also at a higher risk.

Family history also plays a role, so if someone in your family has had melanoma or other types of skin cancer, it increases your risk of also getting it.

What Happens When You See A Dermatologist? 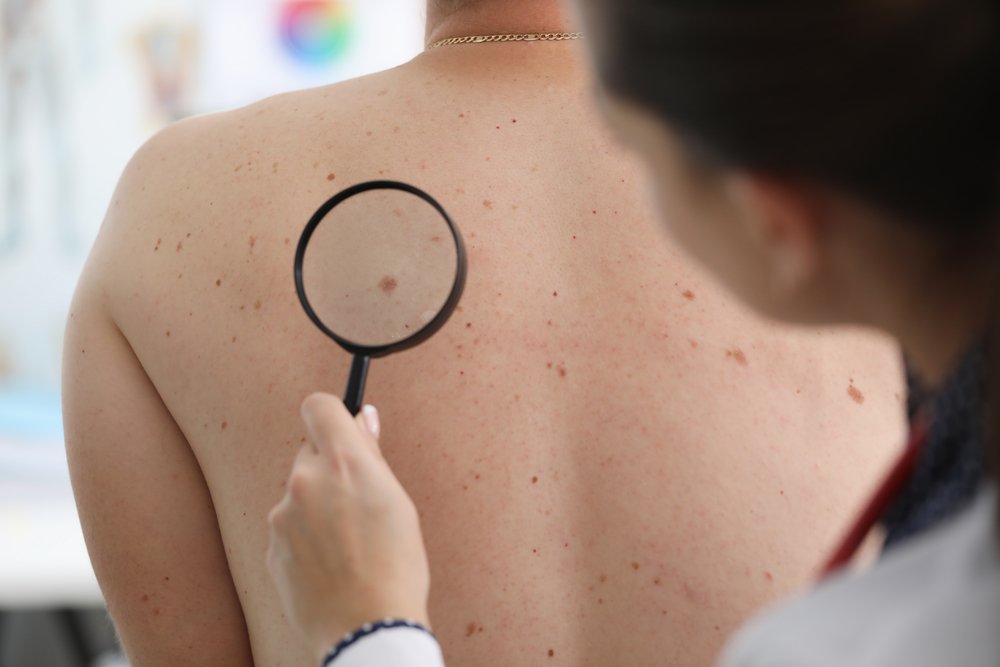 If you are concerned about a mole and it meets any or all of the ABCDE criteria, contact your dermatologist right away. Skin cancer can change and grow quickly, so don’t wait until your next scheduled annual exam—see your doctor as soon as possible.

If the dermatologist thinks a mole could be at risk for cancer, they will likely shave off a piece or cut out the entire mole, depending on the mole’s size and location. They will then examine that piece of the mole under a microscope to identify cancerous moles by performing a biopsy.

Some biopsies can be completed in the office for faster results, while other doctors have to send skin samples and moles to a lab to check for cancerous skin cells.

If the mole is cancerous, the dermatologist will work with you to create a treatment plan. The first step is almost always to remove the cancerous mole completely. This is usually done by cutting out or shaving the entire area and a rim of normal skin around the mole and stitching the wound closed.

Depending on the mole’s size and location, the doctor may instead shave off layers of skin at a time and test it for cancerous cells before continuing the process until only healthy skin remains. In many cases, this method is less invasive because it only removes cancerous cells instead of taking away some healthy skin.

There are also other methods for removing cancerous moles and ensuring only healthy skin remains. Mole removal can also happen by freezing out the cancerous skin cells or removing them with chemotherapy. Your dermatologist will provide options and work with you to create a plan that quickly eliminates the cancer before it can grow or spread.

Your treatment options will vary based on the size, location, and severity of the cancerous mole, as well as your age and overall health. If needed, your dermatologist may bring in other doctors and specialists to form a complete care team and give you the best treatment possible.

Skin cancer is very common. It can become serious, but it is also reasonably easy to treat if it is detected early enough because of advances in medical technology.

You don’t have to live your life in fear of skin cancer, but you should definitely pay attention to your moles and get regular skin exams from your dermatologist. Knowing what to look for in your moles and the signs of skin cancer in moles can help you stay healthy and potentially prevent larger issues from arising.

Did you know others are enjoying great savings here are Front Range Dermatology?  Sign up and we'll send you valuable, money-saving offers each month.